Florentin Holzem, one of our Early Stage Researchers has published the first InPharma publication as lead author in the European Journal of Pharmaceutical Sciences. The article focuses on the discrimination of molecularly dissolved from colloid-associated drug in a time-resolved manner during biomimetic dissolution testing of supersaturating formulations. 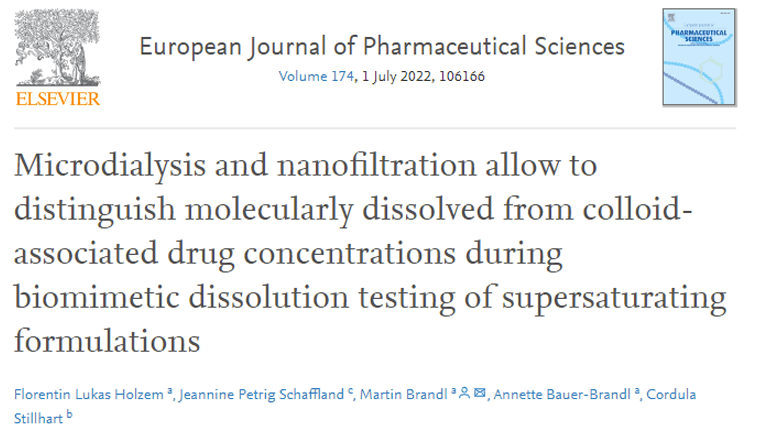 Many new drug entities are poorly water-soluble and thus require solubility-enhancing formulations to ensure sufficient bioavailability. On the other hand, it is more and more accepted that not all “dissolved” states of a drug contribute equally to enhanced absorption, i.e. an increase in apparent solubility does not necessarily go in parallel with an increase in molecularly dissolved drug, the latter being regarded as the key driving force for absorption. Our study aimed to provide time-resolved information on the dissolution, supersaturation, and precipitation behavior of molecularly dissolved drug as released from an amorphous solid dispersion and a surfactant-containing crystalline suspension of Posaconazole (PCZ), a weakly basic and poorly water-soluble drug. Thereby, we aimed to gain a deeper mechanistic understanding of enabling formulation principles and possibly establish a dynamic biopharmaceutical assessment tool for molecularly dissolved drug released from enabling formulations.

A two-staged dissolution test, with media transition from simulated gastric fluid (SGF) to fasted state simulated intestinal fluid (FaSSIF), was performed with three alternative sampling approaches in parallel: the classical bench centrifugation approach was used to assess total dissolved concentrations, while a nanofiltration method and a microdialysis setup were tested for their ability to discriminate molecularly and colloid-associated drug concentrations over time. For comparison, a single-stage dissolution setup was performed, where a marketed PCZ suspension was dispersed in biomimetic media with increasing amounts of solubilizing agents to understand their effect on the concentration of molecularly dissolved drug.